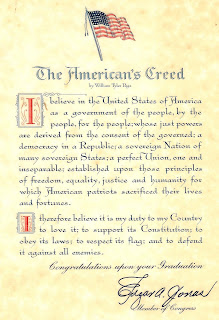 What a bachelor’s degree means today, the high school diploma meant in Dad’s time. Students who completed high school and became good American citizens were highly prized in postwar America. Upon graduation, each student at Nicholas Senn High School received a letter from his or her local congressman, Edgar A. Jonas, along with William Tyler Page’s “The American’s Creed.” I believe the goal was to reinforce a sense of community and duty to the United States during the Cold War. The Creed embodied everything that many Americans held sacred, such as love for America and its Constitution.  Click on the image for a closer view.
Posted by Tom Price at 8:47 AM