The Path to Hell is Paved with Good Intentions

“The path to Hell is paved with good intentions.” There’s another Dickism for you. (See earlier post)

Those words ring all too true in America today. Every intrusion on our freedom by the government (either State or Federal), at least since I’ve been born, has been done with good intentions. The various “Nanny State” initiatives were all enacted to save me from some bad consequence and in some ways even from myself or from my family. We have a very thoughtful government here in Illinois, when they are not lining their own pockets. So it shouldn’t be any surprise that when an Illinois politician takes the White House that he shares that love with the rest of the nation. And there is no time to lose.

I’ve seen our potential future. In the summer of 1987 I stood at the Berlin Wall. I was in Germany for the Reunification and in the fall of 1990 and during 1991 and 92, I toured many cities in East Germany and saw what shambles the SED (Sozialistische Einheitspartei Deutschlands = Socialist Unity Party of Germany) left behind. The country was broke, the currency was worthless, buildings everywhere were in disrepair, and even the streets that rivaled Illinois for pot holes. As I walked down the streets of Leipzig, I could only shake my head at number of video cameras on the street, used to watch the citizens every move a few years earlier. East Germany was a police state that didn’t tolerate dissent and interfered with peoples’ personal lives, if they were deemed a threat. But the Stasi (State Security) watched them anyway to be sure they weren’t.

I believe the members of the SED loved their country. Like an over-smothering parent, they watched and dictated every move their children made – because they “knew” better. But they didn’t know better. A government doesn’t really ever do anything well and efficient. One reason is because of the lack of competition. In the event there is competition, instead of becoming more efficient, it’s easier to change the rules to eliminate your competitors. Even if they eliminate competition domestically there are foreign competitors. In that case you might want to create or join a world organization defines the rules to your liking. The next thing you might do if people still don’t willingly join you is you lock them up or ruin their lives, just like they did in East Germany. There are times when government can be like a cancer, the more it grows, the more damage it does. The question in the United States today is; will we diagnose it in time? 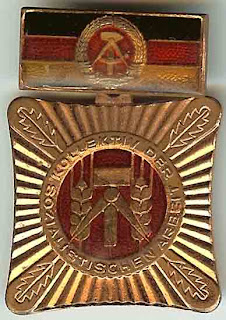