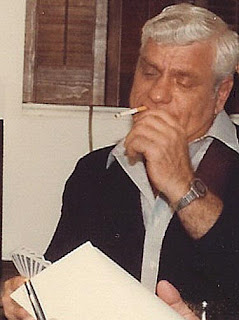 “Give me a hand, will you buddy?” asked Dad one afternoon during the summer of 1979.

Dad needed me to help him with one of his many projects. This time he was making a table to use in our utility room, out of what seemed to be spare lumber in our garage. As always, Dad had a Viceroy cigarette dangling from his lips, as we measured and marked the two-by-fours to cut. We might make mistakes from time to time adding to the comical element of helping Dad. I’m sure I learned a new curse word or two during the process as well. Although I felt like it was torture at the time, those projects were some of the best father and son time we had.

You could argue that smoking killed my dad but it was part of his personality. Both of my parents smoked. Both of my parents suffered health problems related to their smoking. I grew up around them smoking at dinner, playing cards, driving in the car, and during the odd projects we’d do around the house. I’m not a fan of smoking. I don’t smoke and have never been inclined to smoke. But I don’t hate smokers.

Since the days of 1979 the tobacco industry and smokers have been targeted by the ever growing Nanny State. Today, smokers are treated like lepers, banned from restaurants and bars, shunned from office buildings, and taxed into poverty. In order to turn up the heat that will eventually lead to banning of smoking altogether, the Nanny State needed a victim; those people exposed to secondhand smoke. In other words, people like me. While working on my book I came across a press release from the Action on Smoking and Health with the headline:

“Parental Smoking Kills 6,200 Kids Each Year and Costs $8.2 Billion; But Law Is Finally Beginning to Crack Down on Major Form of Child Abuse; At Least Fifteen States Will Take Away Custody if Necessary to Protect Kids”

Let’s face it, smokers are an easy target. I mean, who, besides another smoker, would sympathize with their plight. Well, ironically, me. You see, for me to accept the premise of the story by the Action on Smoking and Health and lawmakers of their ilk, I would have to consider my father and son time with Dad actually child abuse. And that would be a lie.

As a student of German history, the smoker’s plight reminds me of the poem by Pastor Martin Niemöller, First they came…. There are several versions of the poem, but here’s my own version.

First they came for the smokers I did not speak out Because I’m not a smoker.

When they came for me, there was no one left to speak out for me.

When it comes right down to it, I can walk away from secondhand smoke, but I can’t escape a Nanny State that suppresses free will. And eventually, neither can you.

"70s song of the day, "Smokin' in the Boys Room" by Brownsville Station