Take Me Out to the Ball Game

When I was ten years old my dad took the family out to Wrigley Field to see the Cubs play the Cincinnati Reds. The date was July 28th and it was a remarkable game. It was remarkable for several reasons; one was both the Chicago Cubs and the Cincinnati Reds had some all time great players including Pete Rose and Johnny Bench for the Reds and Bill Buckner and Bruce Sutter for the Cubs. The other reason was the game turned out to be one of the longest and highest scoring games in Cubs’ history. After thirteen innings, several hotdogs, a container or two of Borden’s Frosty Malt, the Cubs won the game 16 to 15. I came across the old 25 cent program today. Attached is an image of the inside page—click on the image to get a better view. 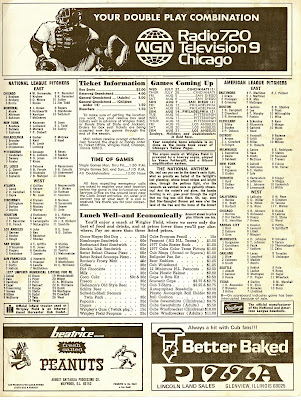 The Area North of Greenbrier

During the early 1970s the area around Greenbrier began to expand. One small development of single family homes called Cedarbook was added almost as an extension of the original Greenbrier neighborhood. One project that was never completed was called Randhaven. Randhaven was to be multi-family housing units not too different from Greenbrier Apartments. But the builder ran out of money and as seen in this view of the area in 1975 the buildings were left unfinished. There they stood for several years. As a kid they presented just another adventure. As I talk about in Last Hand there were many things to do in the Greenbrier area such as unauthorized fishing, roaming the nursery, and going to the White Hen. Rand Haven was unique because it was like having your own local war ruins. Most of the buildings were void of any roofing, all that stood there was concrete, bricks and some stone rubble. If you had the nerve to enter one of those death traps, you'd also find the rusty iron stairwells to climb. The days of adventure with Randhaven lasted several years. Eventually the area would be cleared and build up at the Pointe Apartments. 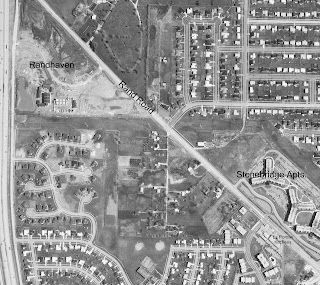 My brother Steve would typically send out some creative Christmas cards. This one was probably from 1985 or so when he was still in his dragon phase. Note the dragon drawn sleigh. 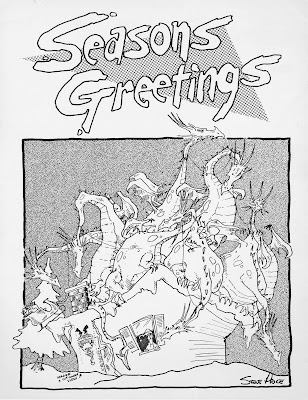